After Athens 2004, another Italian is Olympic champion in the 20 km march. Massimo Stano wrote his name behind Ivano Brugnetti by running as a main contender on the Sapporo circuit. With 1h21:05, the Italian left two fierce Japanese behind him: Koki Ikeda, 9" behind at the finish, and Toshikazu Yamanishi finished 23" behind. Francesco Fortunato finished in 15th place (1h23:43). Federico Tontodonati finished 44th (1h31:19).

After the first 5km, Massimo Stano began to be seen in the small group chasing two fugitives: the Chinese Wang and the Indian Kumar. After another two kilometres, the Italian rider took the lead and set off to try and catch the first two. Francesco Fortunato closes the chasing group. At the 10km mark, Chinese rider Wang was still in the lead, while the Indian could not keep up with the pace and was reabsorbed into the rear, but the chasers, led by Stano, were now reduced. At the 12° km, Stano takes the lead by hooking Wang. After that, the Japanese Yamanishi and Ikeda and the Spanish Garcia Martin, the other Chinese Zhang, completes the leading group while Fortunato is 11th. With five kilometres to go, the situation is still the same, with Stano starting to look around to see how his fellow escapees are reacting. In the 16th kilometre, Massimo tried to stretch out, but the two Japanese riders started with him, creating a trio that left all the others behind. Yamanishi then broke away, but Stano took the first yellow with a kilometre and a half to go while Ikeda stuck to him. After the bell of the last kilometre, the Italian drew the last reserves from the bottom of his legs and decisively distanced the Japanese Ikeda, heading more and more alone towards the finish line. (photo Nucci GMT Sport). 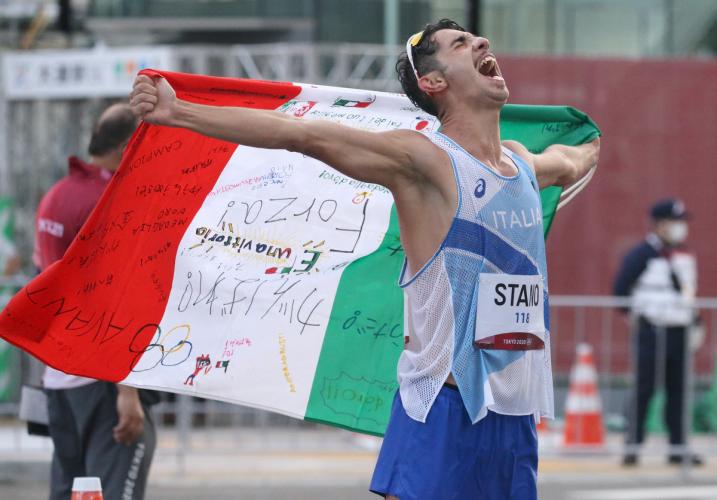